Show keyboard controls
History & Notes: This unique fan belonged to Lula Brown McDonald who was born about 1896 in Chattanooga, Tennessee to a prominent southern family. Lula was a very independent woman and moved to Washington D.C. during the first World War with her young daughter Jane. Here she procured a government job and met James McDonald II of Hailey, Idaho. James was the son of the Standard Oil Company's European representative, James McDonald Sr. After marrying James Jr. in 1927, Lula and Jane moved to Idaho where the family split their time between Hailey and Boise, often making the newspapers for their soirees and development ventures. Lula was an active member of the Hailey and Boise social circles and contributed to artistic and charitable ventures throughout the state. Never one to settle down for too long, Lula traveled extensively throughout her life and amassed an impressive collection of clothing and curios from designers and craftspeople the world over. After Lula's death in 1973, her daughter Jane Gorrissen donated this and many other pieces to the Idaho State Historical Society.
Description: Metal and paper hand fan featuring images of the murder of President Abraham Lincoln and the death of John Wilkes Booth. 11, highly decorated metal sticks support the lithographed and hand painted leaf. Metal sticks each feature an oval miniature of a female head of state, or wife of a head of state from countries around the world and terminate above the leaf in an eight pointed star. On one side of the leaf, hand painted lithograph portrays a portrait of Abraham Lincoln framed by angels, cherubs, and obelisks. On the left side, is a small vignette of sheet of music which features half of "Cancion a Abraham Lincoln." On the right, another vignette of sheet music features the second half of the song. On the reverse side of the leaf, a black and white lithograph depicts the conspirators planning and carrying out the assassination of Abraham Lincoln, ending in the death of John Wilkes Booth in five vignettes. Framing the progression are vignettes of the battle of the Monitor & Merrimac and the battle of Richmond on the left and right sides respectively. Each guard stick is elaborately decorated. The right guard features a small, perforated and hinged perfume container. The head of the fan features a mother of pearl rivet which anchors a metal loop upon which is tied a silk cord terminating in a silk and metallic thread tassel.
Object Number: 1973.224.0128
Object: fan, hand
Category: Women's Garments
Circa: 1860
Materials: metal, paper, silk, elastic, shell, metallic thread
Donor: Jane Gorrissen 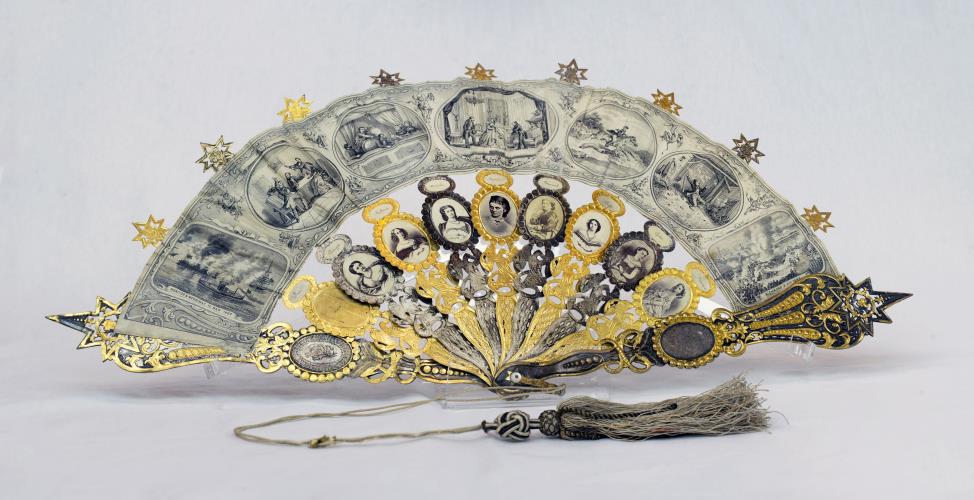